I was able to take out my Ruger 10/22, now fitted with the new Magpul X-22 rifle stock.  I first hit the range and shot numerous groups with both the .22 long rifle CCI Velocitor ammunition, and the Winchester Lead-Free tin ammunition.  I was using my Ruger 10/22, that has a fluted Green Mountain barrel.  This rifle has the stock trigger installed, and a WeaponKraft buffer.  Previously, this rifle was fitted with a “Deluxe Sporter” stock, which is a bit different from the traditional barrel-band in the front stock.  As a caveat, this rifle has always been very accurate, with almost everything I shoot through it.  The only difference when hitting the range this time around, was the stock.  I shot from a bench, with bags in the front and back, with the target set at a distance of 75 yards.  The rifle is topped with a Bushnell 1.5-6×36 Elite 4200 Rifle Scope, and I was shooting at 1″ orange target dots. Although I shouldered the stock when I first received it, this was the first time I would be shooting with it.  I found it to be very comfortable, and with my scope mount set-up, it gave me a good cheek weld.  I had adjusted the stock before hitting the range, so my trigger pull was perfect.  This particular rifle was meant to be a short, walk-around rifle, so being able to remove some of the spacers out of the rear of the stock, gave me what I was looking for.  Lastly, the stock looks like it is heavy, but it is not.  It is quite light and the full grip area makes it comfortable when walking and shooting.

I shot 4 groups, of #5 shots each, then finished up with a 10 shot group of the Winchester lead-free ammunition, because I planned on hunting with it after the range trip.  I found the groups to be right in line with what this rifle is capable of at this distance.  In other words, nothing changed, which in this case, is good.  The average over all the groups shot was between 0.75″ and 1.0″ for the CCI Velocitor ammunition, and approximately 1.0″ to 1.25″ for the Winchester lead-free ammunition (see below for the group pictures).  I spent a few minutes shooting off-hand, and I really started to get an appreciation for the design of this stock.  It balances nicely, and is easy to pull up and shoot, even while walking, then stopping.  It was time to go hunting. I headed out to an area that holds a few ground squirrels to try and get at least one squirrel while shooting the Magpul X-22 fitted 10/22.  By the time I arrived at my hunting location, the wind had picked-up quite a bit.  As an FYI, 26 grain lead free bullets do not perform well when there are 20+ mph wind gusts.  Even so, I decided to hang out and see what would pop-up in the area.  The first ground squirrel that showed itself, gave me a perfect standing, side shot, at 70 yards.  I put my crosshairs right on the head and squeezed.  I saw the squirrel react to the shot, and it looked good, so I went looking for him.  Unfortunately, I found no blood and no squirrel.  I thought it must have gotten away.  The video shows that my shot just skimmed the fur of the ground squirrel, hitting the wood behind it, so he got away unscathed.

Squirrel number two and number three were both in the same pile of weeds, twigs and other misc trash the farmer added to the pile.  Squirrel number two was behind some of the twigs, but the head and shoulder were showing through a “window” in the stack.  I again put my crosshairs on the head of the squirrel and shot.  I saw the reaction of the squirrel, and it was an obvious hit.  He wobbled a bit, then fell backwards, sliding into it’s hole.  The last ground squirrel was peeking out of the pile, so I put my crosshairs just below it’s chin and fired.  The shot hit him, but he started to scramble towards another hole.  I immediately put another shot into him, and he dropped dead.  After further inspection, I saw that the second shot wasn’t necessary. I headed out again and got a chance to shoot again at the range.  This time, I tried out some CCI Mini-Mags, as well as some Federal rimfire ammo.  Both did not shoot as well as the Winchester lead free ammo, and the CCI Velocitor ammo, so I did my final sight-ins with both, marking the slightly different point of impact (which was nice).

Two of Three Ground Squirrels Dead at the Hole

After shooting, I headed to another farm where the farmer told me that they were having some ground squirrel issues in one area of the farm.  When I arrive, I counted 4 ground squirrels running from a small hill into a hole below a peach tree.  I set myself up 70 yards away and waited.  Here’s a tip for when you are hunting ground squirrels.  If they run into their hole, wait a while.  Chances are, they will come out and offer a shot.  That was the case in this situation, but only three of the four came back out of the hole.  Needless to say, none of those three made it back into their hole!  The last one popped out of a hole in the side of a hill.  I had to adjust off my shooting bench and shoot off-hand, but I made a 60 yard head-shot with the lead free Winchester ammo.

I plan on taking this rifle to Arizona in a couple of weeks for some prairie dog and tree squirrel hunting, so I will have more thoughts after that trip.  This report, “Magpul X-22 Rifle Stock – Range Report with Hunt Video”, and video above is just a teaser of what is to come, so stay-tuned! (Varminter receives credit for any sale using the above link – Thank you for your Support!) 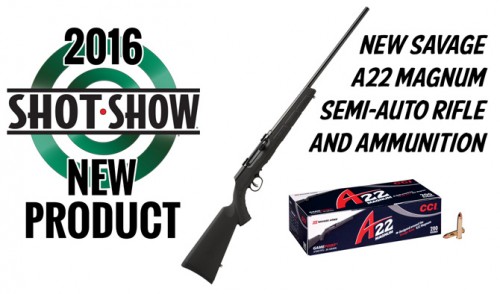 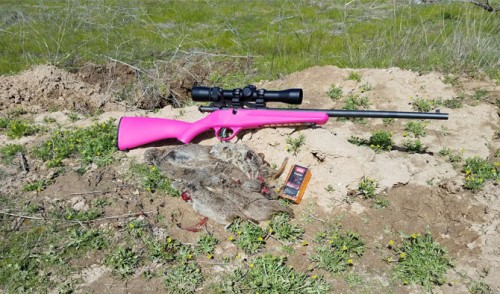 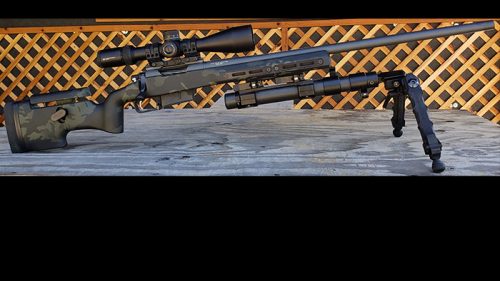 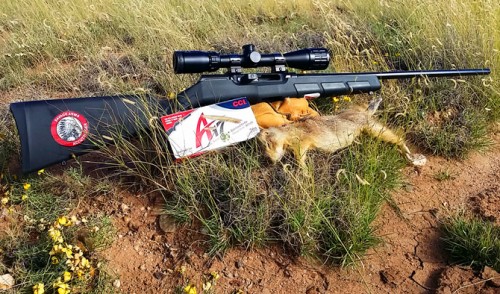 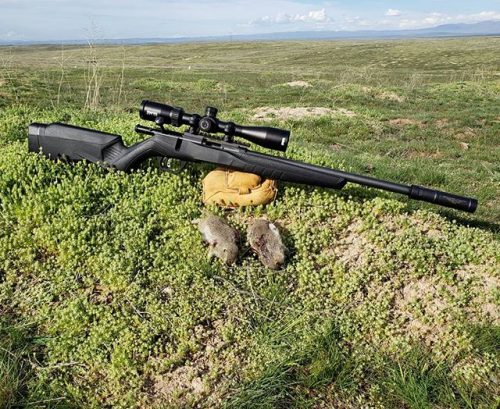