My father's name was Forrest. Everyone called him Sonny gun as he was a gun fanatic. He taught me gun safety, shooting and reloading at a young age. We spent many hours over the years in his gun room talking about rifles and loads.

Let's fast forward many years later having moved 2 and half hours away for work. Now in this area I start seeing groundhogs.. lots of um. So I decided I needed a groundhog rifle. I go to the local gun shop and spy a row of Savage model 40 .22 hornets . Bought one. And my groundhog murdering career began. Visiting home I showed the rifle to my Dad. He fell in love. Back to the gun shop and got him one.

Now hade never seen a groundhog growing up by his house. But We took the rifles to South Dakota on 2 trips and shot a pile of prairie dogs with them. One day he called me to tell me that much to his surprise he seen a groundhog in the back yard. Grabbed his Hornet and missed him. He had never killed a groundhog so he bummed out. I told him not to worry I'd bring him to down to my place and get him one. but he pasted away before we could make that happen.

The following spring my mother called and said there was a groundhog living under the shed.the only rifle we didn't sell out of his collection was the Hornet. it sits next to mine in my safe. 2 and half hours later I was sitting in the yard were my dad and I used to sit, drink a beer and talk rifles. and here is my Dad's Hornet and I'd like to think the groundhog that he missed Just a lil something I put together 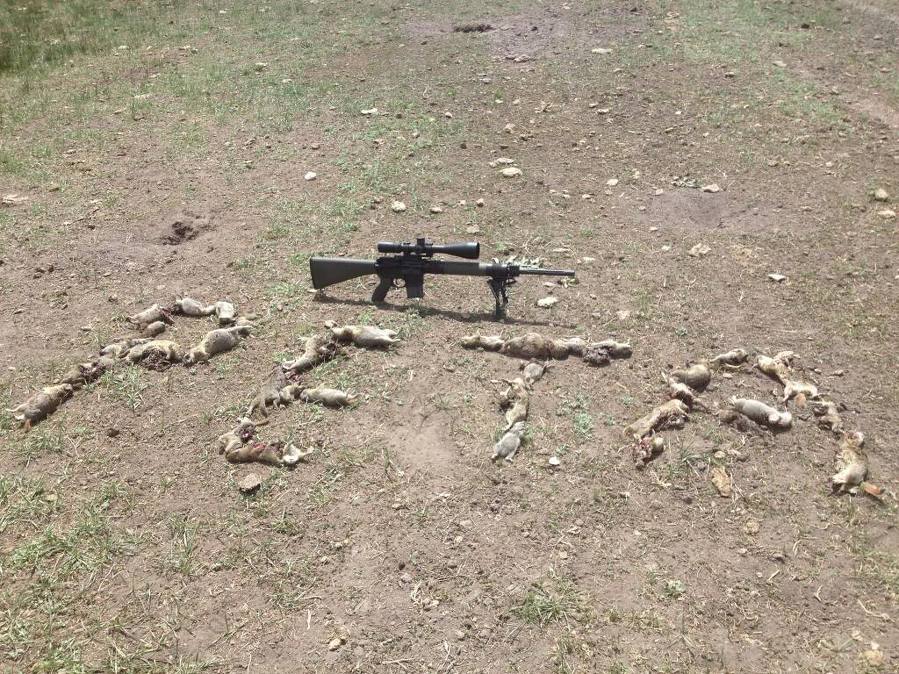 At this time of year I begin to reload. 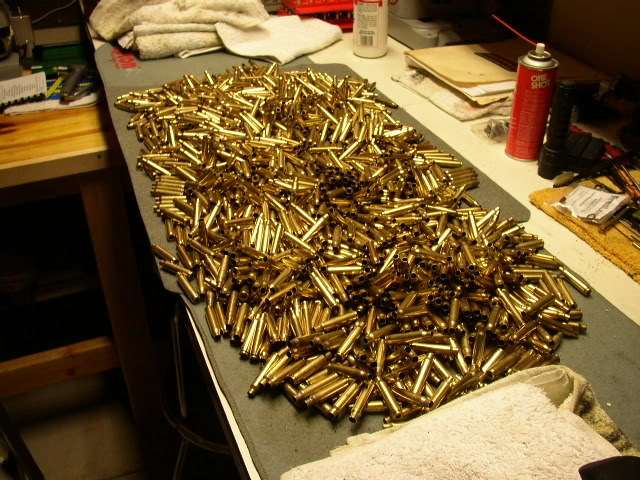 and after some time spent this happens 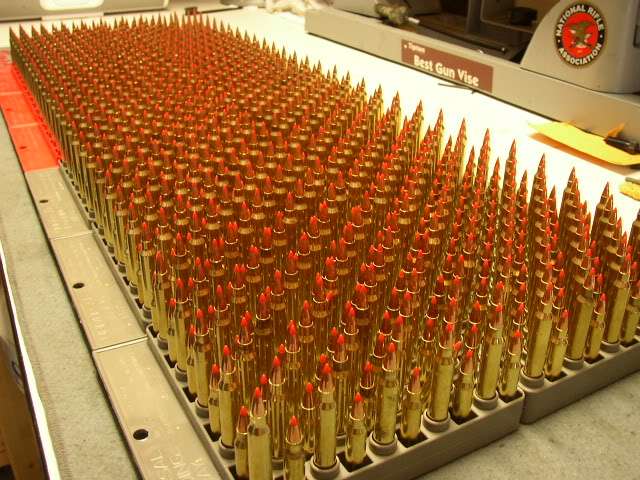 My hard work reloading is shown in this video with spectacular results that I enjoy. Give this video a minute it gets going :-) We are both shooting 204's

Every time I read an NRA, NSSF, or other pro-gun organization's rebuttal to some gun control measure, it is always about an attack on the Second Amendment—always! Well, I think a new tact is in order.

I think it is time we started calling a spade a spade. People like Pancy Nolosi and Chucky Cheese are a main part of our tyrannous government, and we need to point that out (excuse the pun), in spades!

Spent a few hours glassing up squeaks for my boys yesterday.  Not a lot to see but the few we saw.....died.

The Fox were out and about last night. We called in 6 and shot 6, but could only retrieve 4 because of thick brush in steep areas.

Pixs or it didn't happen I say.

So, here it is 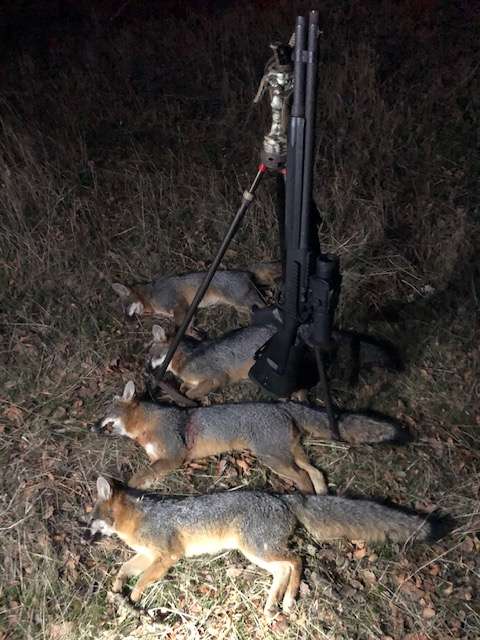 I'm literally talking to the land owner on the phone explaining we are gonna call some coyotes at his place and we come upon this one mousing around in the field.

We stop the truck behind some brush and half pretend to sneak up on it.

This is what happens next.

I still have the nagging feeling of those groundhogs that got away years ago from those 150yd shots with the HMR. I absolutely love that round without recourse & it is my most favoritest for groundhogs. However if I'm out when the pups are then it's like p-dogging for a couple months. But after September they are larger & tougher & require more to kill them efficiently past the 135yds.

I do look forward to your real world findings on this & will continue to follow this topic.

And I do like Red's quote up there. There's more than one reason we call them ground grizzlies. They can be some tough bastids!!

S.E.T. had a Good start to the season. 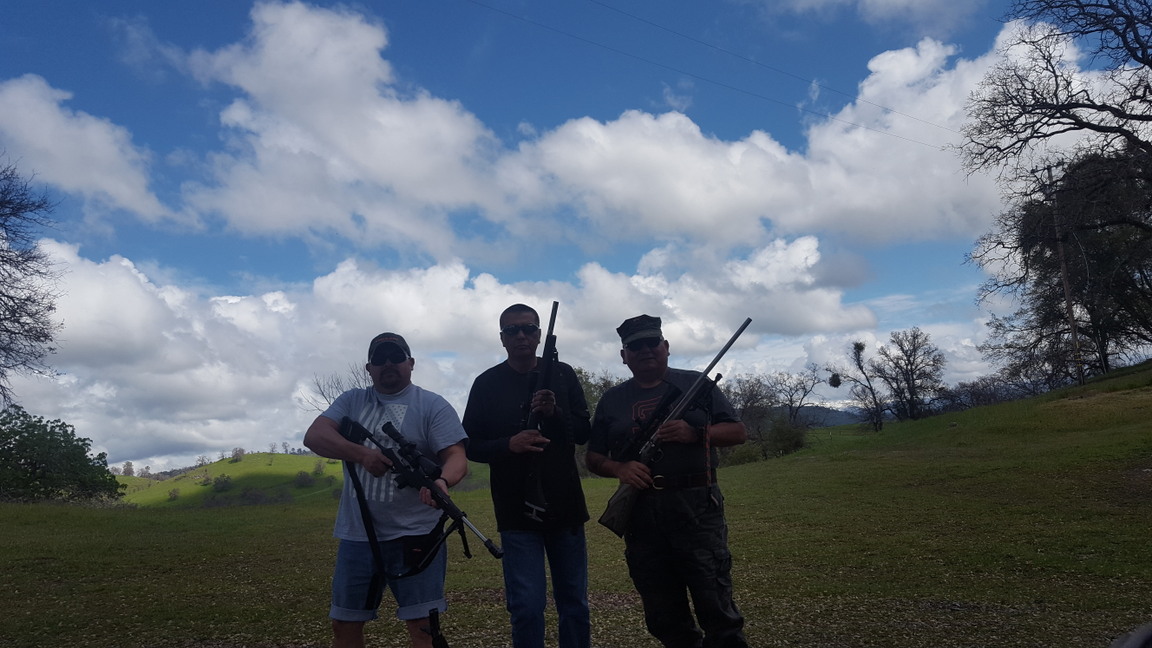 ahh I love my thermal

280yds is not a safe distance.

4 x 16!! That's 2 sheets of plywood end to end!! If your neighbors don't know how you are an A$$hole by now they certainly will once I hang that sign across your front porch!! The Dow just passed 22,000 today and my retirement plan is doing great!

I think I'll celebrate by buying a new rifle.

I got my oldest a savage 93r17 17hmr for xmas. We went to sight it in a few days later. I had just finished sighting it in and handed it to him when a big fat ground squirrel decides that it was a good time to come out and sun himself. I ranged him for my son. Just shy of 150 yards. I was about to tell him to just hold right on it when his gun goes of and I see the squeak start to do the funky chicken. Head shot!. That was probably the shortest time to draw blood  on any gun I've ever owned.

Personally, I think we are seeing a natural correction; the free market, correcting itself so-to-speak.

The recent drought in supplies and the fear brought on by liberal government has spurred an buying frenzy that has been unprecedented.  As a result, many of the big companies have tried to gobble up the smaller ones (very similar to Carnegie's approach to competition).  As we all know, the market is slowing down and companies (large ones specifically) have a tendency to react more slowly.  Bigger company=>more bureaucracy=>slower reaction time.

Now, can anyone say that they're surprised at Cerberus having issues?  I mean, have you seen the crap Remington has been putting out lately?  Crooked sight mount holes, barrels screwed in off center, trigger recall from hell.  It's sad.

Now here's the rub.  We're part of the problem.  Everyone wants a rifle that is accurate (at least MOA if not 1/2MOA), functions well and can stand up to some abuse...all for around $600.  That's it folks.  Companies are driving to meet a cost point that the public sees as affordable, and cutting QC and durability along the way.  This is causing people to hold back, or regard that particular company's products as junk, furthering the spiral down of bad or slowing sales.

I think Savage are the only ones raising prices (domestically), and folks are starting to get upset about it.  With the falling value of the Euro, we are all seeing a resurgence in sales of european rifles over "American" brands.  Have you guys seen Tikkas lately?  There's a hell of  lot of gun for the money in the T-3's.

Now in comparison, 5 years ago a pound of ground beef was like $1.30 a pound.  Now it's well over $3.00 a pound.  A 3lb pot roast is now close to $16.00, whereas 5 years ago that was a $4 cut of meat.  Inflation has occurred in consumables, but pay and other "luxury" items have not caught up.  With the falling oil prices, maybe they never will, and cost of consumables may fall; but I wouldn't bank on it.

Then there is the AR party that everyone dove into, and the hang over now, as people wake up the next day and realized they paid $1500 for something that is actually a $800 chunk of cast aluminum and stamped sheet metal parts.  I think you're going to start seeing these little mom & pop AR shops going out of business soon as well.  Everyone jumped on the bandwagon for a piece of the pie, and now the pie is all gone.

One thing is for sure; we're all going to pay for it (one way or the other).

My rule is, that when I get a new addition an old favorite goes to one of my kids or nephews to keep the shooting interest alive and well. They are happy and ask to go hunting with me. Another hunter is always a good thing.

you wouldn't be looking to adopt would you?